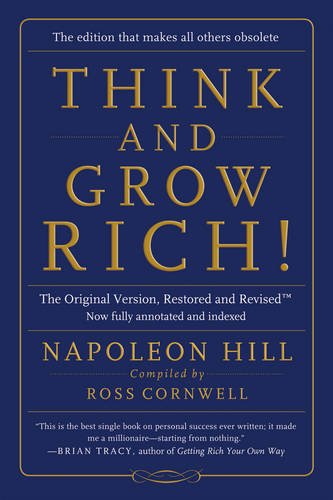 “I thought Think and Grow Rich! was a classic and could never be improved. I was wrong. I am sure Dr. Hill would be greatly pleased to see how his work has been honored and enhanced by this outstanding new edition.” — Wally Amos, author and founder of Famous Amos Chocolate Chip CookiesUnlike most versions of Napoleon Hill’s famous book, this edition restores his masterpiece to its original form and intent. It includes essential material on how to thrive in challenging economic times that was taken out of later versions but is incredibly relevant today. This is the only edition of Think and Grow Rich! that is fully annotated and indexed, providing key details about Dr. Hill’s life and times, his lifelong research, and the leaders of business and industry he studied to glean the invaluable principles of success you’ll discover here.Think and Grow Rich!: The Original Version, Restored and Revised–* is the only fully annotated version of Hill’s 1937 masterpiece* contains 52 pages of endnotes not found elsewhere, representing 10 years of research about Hill and his era, the Think and Grow Rich Philosophy, and the use of the “Carnegie Secret” to achieve success and accumulate wealth* faithfully restores sections of the original 1937 text that were cut out of the book in the 1960s* is “revised” only in correcting errors found in the original edition and to correct instances of inappropriate or obsolete (for today) language* offers one of the only and the most comprehensive index in any edition and the book’s first appendix* contains never-before published photographs concerning Hill, including his family burial siteWHY THIS EDITION OF Think and Grow Rich! IS SPECIAL AND UNIQUE:If you search online or in a bookstore for Think and Grow Rich!, the first thing you notice is there seem to be an awful lot of different versions most for sale, some free.What’s important to know is that there are three versions, or categories, of Napoleon Hill’s book available. How to know which to get?1. FIRST, there’s the original text of the book, a “public domain” work that is published by numerous people in the U.S. and abroad. It is available online, in print, and in bookstores and libraries.This version is not copyright-protected. Most of these editions are simply verbatim renditions of the 1937 text. As such, they contain obsolete language and terminology (from the 1920s and 1930s). They contain typographical and grammatical errors and occasionally also language that today may be considered racist or sexist, but wasn’t in 1937.Many of these so-called “original editions” are also a “blend” of material. They “intermix” or alternate Hill’s original text with entirely new material that was not written by Hill nor ever intended by him to be included in his book.These various versions tend not to read well, as they jump around and back and forth, in confusing and distracting ways, between Hill’s original words and other material that has been basically “cut and pasted” into his text. Some publishers have simply attached a public figure’s name, photo, and a few paragraphs of comments to the book and then marketed it as a celebrity edition with nothing else added. With all these books, it pays to remember that you get what you pay for.2. NEXT, there’s an abridged version of the book (published by Hill in 1960) and also widely available today online and in bookstores. It is a copyrighted version of the book, but one from which Hill deleted substantial sections from his original that were thought at the time to “date” the book. It was for many years a popular and widespread version of the book, but its major shortcoming is that it is incomplete, and it contains many of the same flaws noted above.3. THEN THERE IS the copyrighted Mindpower Press edition Think and Grow Rich!: The Original Version, Restored and Revised. It restores Hill’s book to its original form and content. (Some obsolete passages are included in the endnotes, rather than the main text, but all of Hill’s original 1937 material is included.) This version is fully copyright-protected by the U. S. Copyright Office.Think and Grow Rich!: The Original Version, Restored and Revised is THE ONLY FULLY ANNOTATED VERSION of Dr. Hill’s masterpiece ever published (with more than 52 pages of endnotes representing 10 years of research), and has the book’s first comprehensive appendix and index.It is not only true to the original 1937 Napoleon Hill manuscript, in tone, visual design, and readability, as well as content, but it also solves the problem of textual errors and language and terminology that are meaningless or offensive to today’s readers. Very minor and unobtrusive changes such as these are what is meant by the word “Revised” in the book’s subtitle. They are made for “readability” reasons, not for “political correctness” or “abridgment” in any way.Which version of Think and Grow Rich! you choose really boils down to three choices. When you’re deciding which one to purchase, think about which is not just special, but also unique.

“Think and Grow Rich!…Buy it…you have a book. Read it…you have the blueprint. Do it…you have the world!” — “Cactus Jack” Barringer, entrepreneur, salesman extraordinaire and Shark Tank winner, who has given hundreds of copies of this Cornwell edition in talks to school and college students “I must have read that book 100 times while in training…I was going to fight Muhammad Ali. I was a green fighter, but yet I won, all through reading this book.” — Ken Norton, world heavyweight boxing champion famous for his trilogy of bouts with Ali “This book was a motivating factor for me. It gave me a new lease on life when I realized I could do anything if I had the desire and believed I could achieve my goals.” — S. Truett Cathy, founder of Chick-fil-A restaurant chain “The ‘6-Step Success Formula’ helped me realize that there was a way even for an uneducated lunkhead like me to make it like the big guys. I followed the success formula faithfully, and, lo and behold, my whole life turned around…”Thank you, Ross, for giving me this opportunity to look back and appreciate how really important all of this is and what a difference it has made in my life and the lives of so many others.” — Dick Herbert, head of the largest funeral-cemetery company in the world

“This is the best single book on personal success ever written; it made me a millionaire–starting from nothing.” — Brian Tracy, New York Times bestselling author of The Psychology of Selling “Helped me to become the world’s greatest retail salesperson. A must read if you want to become somebody.” — Joe Girard, World’s #1 Retail Salesperson, attested by Guinness Book of World Records “It’s the classic of all classics.” — Harvey Mackay, author of New York Times bestseller Swim with the Sharks without Being Eaten Alive (Harvey was on his way out the door to catch a plane to the Summer Olympics when he submitted this blurb.)

“This book is a jewel! Buy lots of copies for your friends and clients.” — Dottie Walters, founder of Walters International Speakers Bureau (Dottie was a good friend of Hill’s since the night he “discovered” her on the TV program To Tell the Truth.) “I read it every two or three years to keep my drive going.” — Daymond John, founder and CEO of FUBU apparel and TV personality “The cogent advice articulated by Napoleon Hill is as relevant and pertinent today as the day it was written.” — Donald R. Keough, former President and CEO of Coca-Cola

My Journey: Transforming Dreams into Actions

A Girl to Remember